Egg artist Shannon Wallis has been writing pysanky since 1994 when she learned the technique from a fellow elementary school art teacher. Shannon finds both the traditional and modern designs enticing, especially when they involve geometry. Besides writing pysanky, Shannon is a potter and the mother of two teenagers.

Pysanky (plural “pi-sahn-KIH”) or pysanka (singular “PIH-sahn-kah) is Ukrainian for Easter Eggs. Traditional pysanky have been around for over 2000 years. The name pysanky comes from the Ukrainian verb “pysaty” which means “to write.”

Pysanky are created using a wax-resist method, similar to batik (wax -resist dying of cloth). A tiny funnel, called a kistka, is filled with beeswax and heated over a candle. The melted wax is drawn onto the egg, which seals in the original eggshell color. Then the egg is placed into the lightest color dye. The next layer of drawn-on wax seals in that lightest color. The dye-wax sequence is repeated with increasingly darker dyes. After the darkest dye bath, the wax is removed and the all colors are revealed. After the egg is blown out, a protective coating is applied. 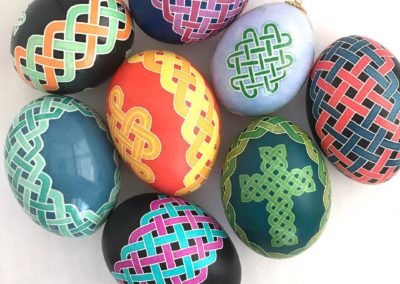 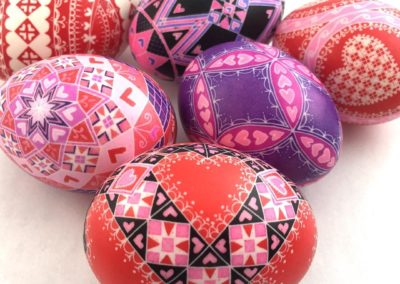 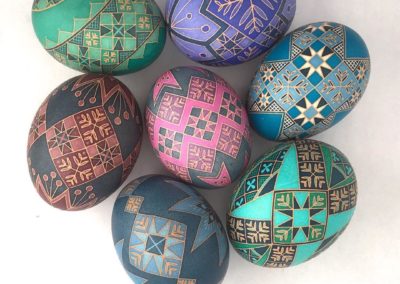